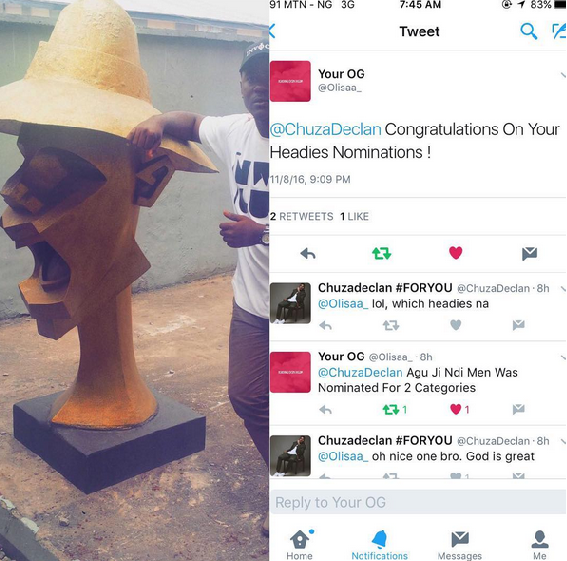 Chuza shared the good news on his IG page by sharing the photo above and writing about how he first visited Hip TV and standing by the ‘Headies’ statue with only a dream, now he has two Headies nominations by proxy(meaning the song that got nominated isn’t his, he’s a guest artist on the song). Big congrats to him! Read what he wrote below;

“Just about a year ago, when I first visited the Hip Tv studio. I took a picture with the Headies Stature and said “someday”. I didn’t know how it was gonna happen, but I knew it just had to happen.

Early this year my elder bro @beatsbyjayy came all the way to pick me up from school, saying my eldest bro @thisisaq needed me on a song (that about 4 dope guys tried but didn’t get it right) titled Agu Ji Ndi Men. Thank you @thisisaq, thank you @beatsbyjayy. God bless you for making the 1st phase come through.”When I say “someday” (like I did I’m the picture with Patoranking at the MAMA’s nomination award) I mean it. Now that’s cos I believe so much in myself, and who I’d be next year. My next project is #BuFEST2016 it’d be Epic 🤘🏿

My oh my! Y’all need to this epic childhood photo of popular campus photographer, Seye Kehinde

Isn’t that too close? Y’all see how Babcock...

Nicki Minaj dazzles at the A&E’s Concert for...